Quality of ingredients and techniques of whipping egg whites often determine quality of macaroons and meringues. Whether you use French, Swiss, or Italian method, I hope that you find the following recommendations helpful:

Clean hands, cold eggs, three-bowl method are ideal conditions for separating eggs. One bowl holds the yolks, the second is to empty the whites into, and the third is for cracking the eggs over.

To crack egg shell, firmly tap center of each egg against a pointed and hard surface such as a table edge. Turn the cracked egg upright, remove the top portion of the shell and allow the white to flow over the side. With a shell half in each hand, pass the yolk from one shell to the other, while tipping it slightly to remove as much of the white as possible.

Of the three known preparation methods, French or conventional produces the least stable macaroons and meringues. Adding an acid such as cream of tartar or lemon juice to egg whites before whipping them will help increasing stability. Using an unlined copper bowl for mixing also helps without having to add any acid.

French method requires whipping egg whites to soft peaks before slowly adding a proper amount of sugar. Sugar, if added too soon, will likely inhibit egg whites from foaming. Otherwise, it acts as a great stabilizer by allowing us more beating time. We can go longer without overwhipping the whites.

Egg whites reach soft peaks when holding a whisk straight up, we can see a point formed but fallen over immediately. It then only takes another 25-35 more strokes to reach stiff peaks. 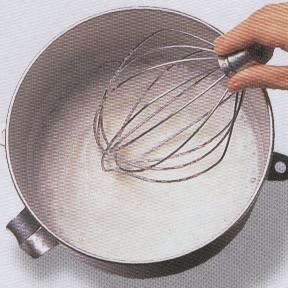 Swiss method requires dissolving sugar in egg whites using a double boiler over low heat. if you do not own a double boiler, place a mixing bowl over a pot of simmering water. Make sure that the bottom of your bowl does not touch the water. This mixture of sugar and egg whites should just be about 100 degrees F. before you begin the whipping process. It will not whip properly if too hot.

Swiss meringues and macaroons are extremely stable, but do not expand as much as those made with French method.

Italian method is rarely used in baking cookies. It requires whipping egg whites to soft peaks, then slowly adding hot sugar syrup, and continuing the process on high speed until cool and stiff. 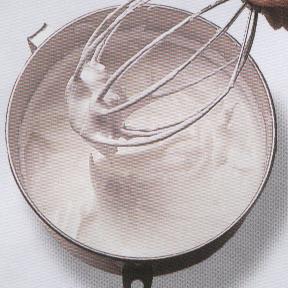 Italian macaroons and meringues are usually low in volume compared to those made with French or Swiss method. They are, however, the most stable.

These methods of preparation would not be possible without a unique combination of four egg white proteins: ovalbumin, conalbumin, globulin, and lysozyme. 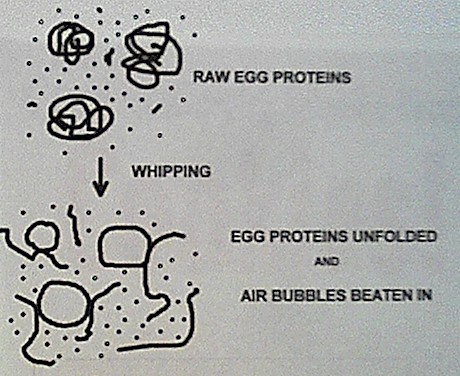 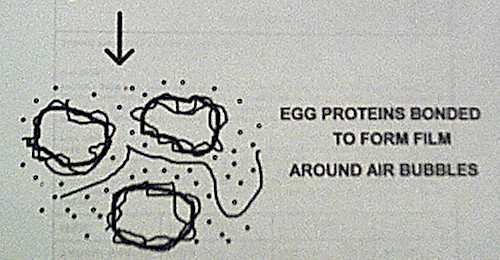 The Process of Egg Foam Formation

When whipping egg whites, we automatically incorporate air bubbles to them. At the same time, egg proteins start to unfold. These strands of unfolded proteins then move to air bubbles and bond together. They eventually form a filmy network around these air bubbles.

Within the protection of this protein network, these air bubbles are less likely to collapse. As we continue whipping, we incorporate more and more air bubbles.

Finally, when there is no more proteins to unfold, the already unfolded strands of proteins start to curdle. If whipping continues, they are likely to return to their original folded condition, and the overwhipped egg whites look like overcooked eggs.

Baking homemade cookies, including macaroons and meringues, should be a fun experiment and the kitchen is our laboratory. Please continue experimenting with many easy homemade cookie recipes.

* These images are courtesy of On Baking – A Textbook of Baking and Pastry Fundamentals by Sarah R. Labensky with Eddy Van Damme, Priscilla Martel and Klaus Tenbergen.