Ingredients for no bake cookies are generally of two types:

Flour is not a direct ingredient in no bake cookies. Instead, it is essential in many baked products that go into the making of no bake cookies. Read more on the role and effect of flours on cookie baking.

Besides being the structure building material in baked goods, wheat flour also provides flavor, color, and nutritional value.
It consists mostly of starch (68 – 76%) and proteins.
Starch is basically a complex carbohydrate that can be broken down into simple glucose, the food of choice for yeast. In the oven, starch absorbs moisture from cookie dough and expands in volume. When temperature reaches 140 degree Fahrenheit, it begins to gelatinize, contributing to the shape and form of homemade cookies.

Each wheat kernel consists of:

There are different grades of flour depending on what part of the kernel it comes from.

Patent flour comes from the center of the endosperm. It has the highest quality and the lowest amount of ash (minerals).

Clear or cutoff flour comes from the endosperm after patent flour has been extracted. Its relatively high protein and ash contents exhibit in its dark color compared to patent flour.

Whole wheat flour is high in proteins (11 – 14%), but its ability to form gluten is weak compared to white flour because:

Glutenin and gliadin are the two proteins that can form gluten. Gluten is basically a network of proteins that is both elastic and plastic. It has the ability to stretch into a very thin film without tearing, and spring back into its original form. 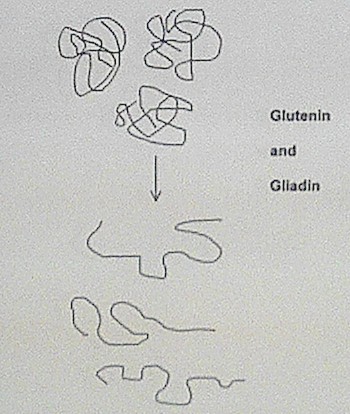 In the presence of moisture such as water, glutenin and gliadin relax from their tangled state. Pressure exerted through mixing and kneading helps these relaxed strands of proteins to line up and form a strong, cohesive network.

Keep wheat flour in a clean, well-ventilated area with a temperature between 75-80 degrees Fahrenheit and a relative humidity between 55-65%. Whole wheat flour has shorter shelf life due to its higher fat content.

Generally, soft wheat flour imparts tenderness to homemade and no bake cookies. Another ingredient that contributes to this quality is ……