These French coconut macaroon sandwiches are exquisite, filled with either lime, lemon or orange curd. The filling should be prepared in advance.

Coconuts had been called the nut of India even though no one knew for certain where they originated. A tropical plant, coconut palms are found along the coastal areas throughout the tropics. They grow quickly and can start bearing nuts as early as six years old.

India leads the world in coconut production, followed by the Philippines, Indonesia, Malaysia, and Sri Lanka. If not harvested and consumed earlier, coconuts will mature completely within 14 months.

Every part of this nut is useful in the kitchen. Coconut water is naturally sweet and very refreshing. In the movie Castaway, Tom Hanks drank coconut water straight from the nut. That is the best way to take it.

Coconut milk is extracted from the mature gelatinous flesh or meat, which is very rich in oil. The mature and firm meat is also shredded to produce coconut flakes that we use widely in baking. The hard shells can be used as fuel for the furnace. 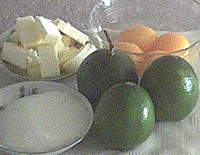 Now that we have the lime curd, let’s prepare the coconut macaroons.

If you prefer almonds, replace coconut flakes with 1½ cup of whole blanched almonds, and follow the above directions for preparation.