Once upon a time, a woman named Blondies was walking along a deserted beach, and suddenly spotted a shiny object that was partially hidden in the sand. She picked it up and realized that it was a beautiful bottle. It looked very much like the one she had seen on the television show “I Dream of Jeannie.”

When she removed the top of this bottle, a genie popped out. The genie said, “I have been living in this bottle for over 5,000 years, waiting for someone to set me free. In return for helping me, I am granting you one wish.”

“My magic is very powerful. You only need one.”

Looking at her map, the genie shook his head, “I’m good, but not that good. Make another wish.”

Blondies thought for a moment and said, “I’d like to meet and capture the heart of a perfect man.”

“What is your definition of a perfect man?”

“He is intellectual, affectionate, faithful, generous, compassionate, athletic, drug free, a social drinker, a nonsmoker, a great cook; has a high-paying job; loves kids; enjoys traveling; and can make me feel as if I am the only woman in the world.”

The genie let out a huge sigh and said, “Let me see the map again.” 🙂

As you’re wondering about the relevancy of this story1 in a cookie recipe, bake a batch of these sweet and delicious blondies. 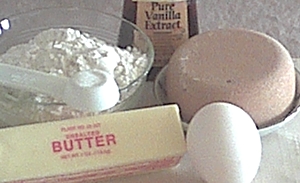